Day 1 of the show started off with the host Ebuka asking the ex-housemates what their expectations was for the reunion show and it was quite clear their interests align perfectly with the viewers who are all waiting for the drama and controversies that come with the reunion show.

The show also featured some interesting scenes from the Big Brother Naija season 4. The scenes include Veto Power Game of Chance, Bet9ja Coins, the splitting of housemates into the Icons and Cruisetopia teams, Big Brother Naija Games or Nomination Tasks. 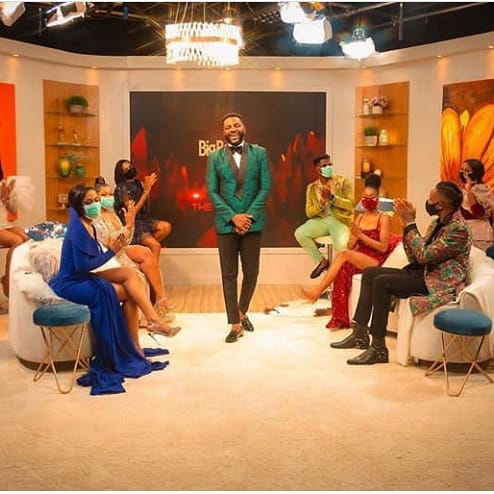 Tacha: I’m Too Original to Copy Anyone

As the Day 2 of the Big Brother Naija reunion show for 2019 ex-housemates moved further, Ebuka threw a question to Tacha asking of her opinion on the accusation from fans of the show that she played the script of ex-housemates of the show like Cee-C and Tboss.

Tacha who looked caught off guard by the question claimed that she is too original to act the script of another person including the likes of Cee-C and Tboss.

According to Tacha, she believed coming into Big Brother Naija reality Tv show and wanting to be another person will be something that totally won’t work for her.

Omashola refuted accusations that he played the role of Eje Ejeba who was the winner os the season 3 edition during his time in the show. He claimed that he has never been a fan of Big Brother Naija show and have never watched the show prior to his entry in to the show.

He went further to say he couldn’t have acted a script he knows nothing about even after Ebuka drew his attention to how he unnecessarily screams the word “WARRI” while he was in the house.

He also expressed that he was pleased because his character in the house worked for him and earned him the 4th position.

Today’s show started with Ebuka asking mercy a question which was one of the talking points during the show. He asked why Mercy had to come to the show with so many clothes. Mercy responded by saying it was her normal lifestyle that she never repeats clothes. She continued by saying it was her usual culture and have always hated repeating cloths.

The housemates were asked to name who they felt bragged during the show. The response saw Seyi, Tacha and Omashola top the list.

Jackye aired her opinion when asked if she bragged with her intellectual capabilities while in the house but she denied it right away. She said “I didn’t intimidate anyone or show off my knowledge”.

Nelson and Diane who joined the show through virtual aid were also asked to respond on claims that Omashola bragged while in the house. Nelson denied the claim but on the other hand, Diane stated that at a point Omashola bragged and showed off his personality.

KimOprah was asked if she felt Tacha bragged and showed off while she was in the house, she responded that Tacha bragged and gave a situation where Tacha made a statement that the rest of the housemates followed her into the show while they were being introduced in the Big Brother house.

Venita supported KimOprah’s claims that Tacha brags a lot which is unknown to her and it has nothing to do with her confidence and the other person’s insecurities as claimed by Tacha. Frodd responded that bragging is explained based on someone’s personal insecurities which Ebuka was quick to disagree.

The Big Brother Naija reunion show will premier on 1st of June, 2020 and end on Thursday 4th June, 2020. DSTV and GOTV subscribers will be able to watch the show on the following channels.