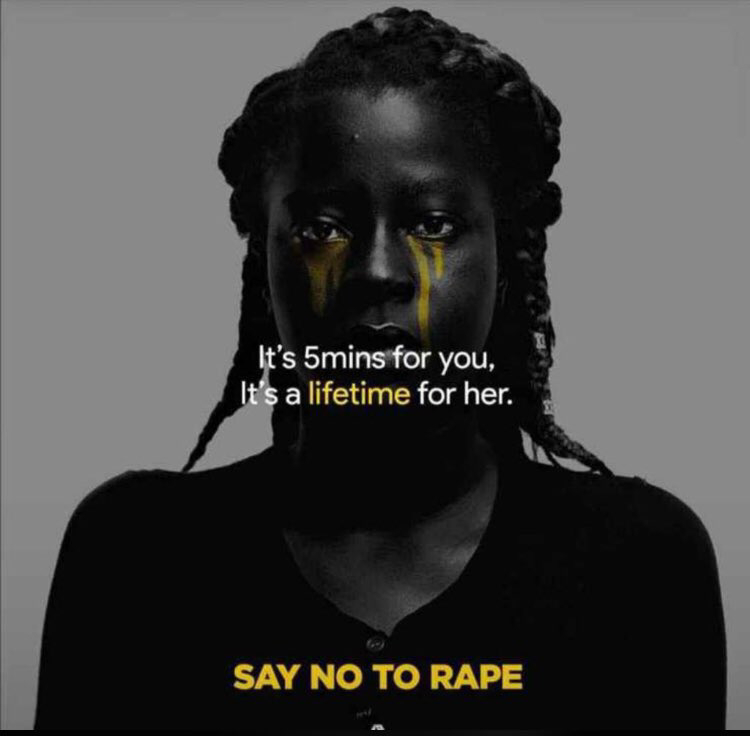 In my First Article on Rape.we have talk on definition, types, effect,how can we stand against it and help, Etc.
Here I will explain further on effect of Rape.
Even though the effects and aftermath of rape differentiate among victims, individuals tend to suffer from similar issues found within these three categories. Long term reactions may involve the development of coping mechanism that will either benefit the victim, such as social support, or inhibit their recovery. Seeking support and professional resources may assist the victim in numerous ways.
Effect of Rape
. Physical effects
. Disassociation Inability or reduced ability to experience emotion.
. Fear
. Embarrassment & shame
. Guilt
. Practical factors
. Depression
. Recurrent dreams and nightmares
. Pregnancy
. Suicide
N:B I said earlier in my first article that The effects of rape is not the same for every one, as we are all affected in different ways and recover at different rates. However, from our work with survivors we know that there are some common responses to rape and sexual violence. We also know that the effects can last many years and can take many years to show themselves. Here are some of the common effects. So let me emphasize it. 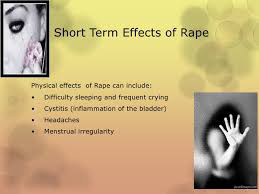 Physical effects: These may be instantly obvious if the attacker has used violence during the assault and you may need immediate hospital treatment. However, it is also worth considering physical effects that might arise in the future such as sexually transmitted infections. you should report the rape or you can call your local doctor
Disassociation Inability or reduced ability to experience emotion: For many an initial reaction to being raped is one of shock and Inability or reduced ability to experience emotion.Many people initially feel calm and shut off from what's happened. This reaction can sometimes surprise friends, family and professionals who expect survivors to be saddened immediately after an Rape. However, disassociation is a natural defence mechanism and is perfectly normal. Usually after a few days or weeks you will begin to have a range of other reactions including anger, fear and shock.
Fear: Depending on the circumstances you may feel fear about a number of things. You might have been physically threatened during the Rape, you may be fearful of reporting to the police because you are worried about what this will lead to, you may feel reluctant to tell friends and family for fear of upsetting them. If you know the rapist or he knows where you live you might be afraid of continued violence. You might feel worried about becoming pregnant or contracting an STD. Later on you may worry about being able to be in an intimate or sexual relationship.
All of these fears are absolutely normal and common and given time and support they can be overcome. Discussing them with a friend or counsellor will help.
Embarrassment & shame:  Many people who've been sexually assaulted feel embarrassed or shameful about what has happened. Most of us find it difficult to discuss intimate things so it is not surprising that you might not find it easy to discuss what has happened with strangers or even friends. In these circumstances it is sometimes easier to talk to someone on a telephone helpline who should take things at your pace.
Guilt: Feeling guilty when you've been raped is common. You may feel that you could have done something to prevent the attack or, if you know the attacker, you may feel that you somehow 'provoked' the rape. Remember, rape or sexual assault is never your fault – young girls and women in their 80's are raped. Men who rape have control over their behaviour and no matter what you wear, what you drink or your relationship with the assailant you have the right to say no to sex. Yes!
Practical factors: sexual violence can disturb your normal routine of living and many aspects of your life. You may feel a strong need to get away and to make practical changes in your life. Your priority should be to feel safe. Do whatever you need to do to get back your feelings of security and safety. Get a guard dog, install extra outside lights, leave interior lights on, get an alarm system, invite friends or family members to sleep over, buy hand held alarms, etc. It is not silly to want to protect yourself. Do what makes you feel comfortable and safe.
Depression: Depression can be expected as you start to come to terms with or recover from any major trauma or emotionally charged event. Dealing with the memory of the assault as well as the things that follow (the police, telling friends and family going to court, having medical examinations etc.) can be extremely draining physically and mentally.
Recurrent dreams and nightmares: You may experience recurrent dreams and nightmares as your brain tries to process, understand and recover from what has happened. You will remember how it happened,you may have sleepless nights. This is normal and the nightmares usually become less frequent over time. Talking about them with someone you trust will help – it might not stop the dreams altogether but it will help them seem less powerful and overwhelming.
Pregnancy: pregnancy may result from rape. The rate varies between settings and depends particularly on the extent to which non-barrier contraceptive are being used.
Suicide: Survivors of rape are more likely to attempt or commit suicide. The association remains, even after controlling for sex, age, education, symptoms of post-traumatic stress disorder and the presence of psychiatric disorders.The experience of being raped can lead to suicidal behavior as early as adolescence. They also feel embarrassed to talk about what had happened to them.
You can also read :
Article : Rape
Article : Types of Rape
Don't forget to drop your comments, like , share and follow us for more information.
Article