on July 07, 2020
Acting Chairman of the Economic & Financial Crimes Commission, EFCC, Ibrahim Magu, and the Department of State Services, DSS, were principal actors in a drama of confusion, arrest, denial and interrogation, yesterday, in Abuja, the nation’s capital. 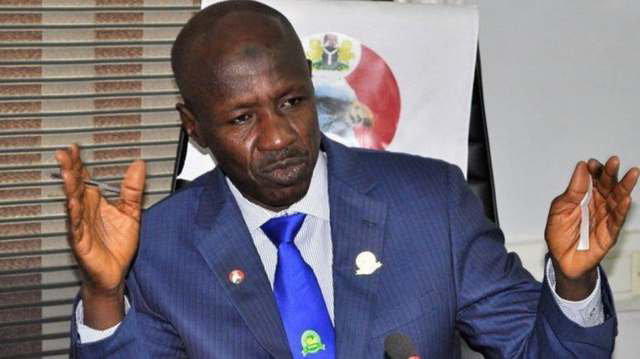 Initial reports indicated that Magu had been arrested by men of the DSS, but this was refuted by the agency, which said that its agents did not arrest him.
In a statement, DSS Public Relations Officer, Peter Afunanya, said yesterday: “The Department of State Services, DSS, wishes to inform the public that it did not arrest Ibrahim Magu, acting chairman of Economic and Financial Crimes Commission, EFCC, as has been reported by sections of the media. The service has since today, July 6, 2020, been inundated with enquiries over the alleged arrest.”
The EFCC, on its own part, also said that Magu was neither arrested nor forced to go anywhere, but that he honoured an invitation to appear before a panel sitting at the Presidential Villa.
Dele Oyewale, EFCC spokesman, denied that Magu was arrested or forced to go to the Presidential Villa to face a panel, but that he went to the Banquet Hall wing of the Presidential Villa, Abuja.
“He was served the invitation to the panel, while on his way to the Force Headquarters, Abuja, for a meeting.
“The EFCC boss was neither arrested nor forced to honour the invitation. A member of a legal team from the EFCC is also with him on the panel.”
Magu stopped in traffic
But Vanguard gathered yesterday that the EFCC boss was stopped in traffic while moving out of the Wuse II Annex of the EFCC in Abuja by DSS operatives who extended an invitation to him.
He was, however, brought to the Conference Centre of the Presidential Villa (Old Banquet Hall) where he was grilled for hours by a Presidential panel set up to investigate alleged infractions against him.
It would be recalled that the Attorney-General of the Federation, AGF, and Minister of Justice, Abubakar Malami, SAN, had recently written President Muhammadu Buhari on why the EFCC boss should be replaced, having been rejected many times for confirmation by the National Assembly.
A former Director-General of the Department of State Service, DSS, Lawal Daura, had also written what was said to be a damaging report against Magu to the Senate.
Journalists who thronged the venue to cover the event at about 3.20pm, were turned back by security personnel.
Even when the journalists covering State House decided to go to the press centre at the Old Banquet Hall, they were politely told to excuse the place for a while.
“They said you people should excuse the use of this place for today,” a security official detailed at the venue politely told reporters. At press time yesterday, Magu was till being quizzed by the panel
It would be recalled that Malami had in a leaked memo, asked President Muhammadu Buhari to sack Magu over “22 allegations.”
AGF’s moves against Magu
The AGF was said to have also accused the acting EFCC chairman of insubordination and misconduct.
Malami in the memo to the President, was also said to have shortlisted three candidates to be considered as Magu’s replacement.
“I can authoritatively tell you that though Magu has survived previous plots to remove him, the AGF’s legal opinion remains the deadliest plot to get Magu out of the EFCC as AGF’s letter to the President contained 22 allegations that require Buhari’s decision on whether or not to send Magu’s name to the Senate for confirmation or replace him.
“This is because the office of the AGF is the supervising ministry of the EFCC and so his legal opinion cannot be treated with levity.
“For example, Malami alleged accounting gaps or discrepancies of figures concerning recovered assets, claiming that Magu was not transparent enough in the management of recovered assets,” a source had said.
It would be recalled that Magu had also in his response to DSS allegations against him in 2017, said his official residence was not paid for by “a questionable businessman.”
He had said: “The entire cost for both two-year rent and the furnishing of the house is N39.628 million and not N43 million. Details of the transaction are contained in the contract award letter and payment schedule which are attached to this letter.”
The DSS had claimed the house was got from Mohammed Umar, a retired Air Commodore, now being tried for money laundering and illegal possession of firearms.
Magu also denied “penchant for air travels” in private jet belonging to Mr. Umar, but admitted he flew the said aircraft on two occasions: one, offer of ride from Kano to Abuja after an official assignment with two EFCC directors; two, when he was traveling to Maiduguri to see his sick mother.
“These, for me, were harmless gestures as we were both members of the presidential investigative committee on arms procurement. At the time I had no knowledge that he was under investigation for any alleged crimes,” he said.
He said his relationship with Mr. Umar was one of “professional acquaintance devoid of issues of conflict of interest” since their paths crossed when they became members of the arms procurement probe panel.
Tag : EFCC,DSS.
Kindly drop your comments, like and share and follow us for more News.
News