Nollywood actress, Lizzy Anjorin, seems to be very much in love despite the controversy trailing her relationship 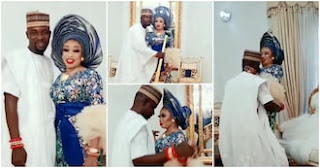 Being in the spotlight is not for the fainthearted and those who know this readily find ways to shun detractors once they arise.

Nollywood actress, Lizzy Anjorin, took to social media to share a cute and romantic video with her husband whom she recently got married to.

In the series of videos shared on Instagram, the actress was seen trying to concentrate during a photoshoot and her man decided to goof around and distract her in a cute way.

In the caption of the post, the actress explained the importance of men investing in the women in their lives.

According to her, there are some women out there who need a little amount to invest with so as to become billionaires.

Speaking further, Lizzy Anjorin reacted to her husband’s cute antics in the video. She wondered why numerous women would not claim to have kids for him seeing the way he is.

The actress said that all these are happening despite not using ‘kayan mata’ to hook her man. She also wondered what would happen if she spends one month with him for honeymoon.

See the cute videos below: