The Ooni of Ife, Ooni Adeyeye Enitan Ogunwusi, Ojaja II has vowed to name his unborn prince after the late Sir Adesoji Tadenikawo Aderemi, who was the 49th Ooni of Ife during his lifetime as a mark of appreciation to Aderemi for his good works.

Ooni Ogunwusi made the promise on Friday, while speaking at the 40 years remembrance programme organized by the late Aderemi’s princes, princesses and grandchildren to remember the Ooni who reigned between 1930 to 1980.

At the event which held at his Ile Oduduwa palace, Ooni Ogunwusi described his predecessor as a great icon who will forever be remembered for his immeasurable contributions to the independence, stabilization and growth of Nigeria.

“I wish to implore our politicians across the country to look deep into the life, time and accomplishments of Sir Aderemi and learn great lessons of servant leadership. He was selflessly committed to the development of the country.

“Among several tangible virtues to be emulated from the good life of Sir Aderemi is the good name he left behind which still speaks volume till date. Houses, cars and other material gains of life will surely fade away while one’s name remains in the book of history forever.

This is coming months after tongues wagged that his queen, Oloori Silekunola Naomi is pregnant and has moved out of the palace for proper care at her mum’s place.

Though the queen revealed in a social media post that she had pressing issues to attend to and not posting on social media, many wondered what was happening to the royal couple since their marriage has not produced a child.

Everyone knows the king needs a heir.

This move to name his unborn prince has confirmed news that the queen who Ooni married 20 months ago could be pregnant.

Prior to the event, the royal couple hadn’t  produced a heir to the highly revered throne of Ile Ife.

Though Oba Adeyeye Enitan Ogunwusi has a daughter who is in her 20s and studying abroad, his first marriage to Adebisi Adebukola nee Bombata didn’t produce any children.  They were married for eight years before the marriage crashed.

Though Adebukola was with him when he was installed the Ooni, the marriage could not sustain whatever pressure it faced and after the coronation, she dumped him and travelled abroad.

This crash made him seek the hands of Benin-born Wuraola Otiti in marriage. Wuraola became a full-fledge Ile Ife Queen in 2016. 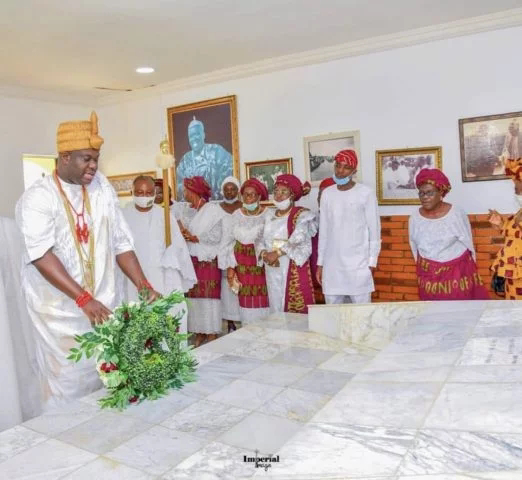 That became his second marriage.

Though they looked the perfect pair, the marriage crumbled like badly stacked cards in 2017 amidst much drama on social media.

With two failed marriages which didn’t produce any heir, the whole of Ile Ife waited with bated breath for the new queen to make the gods happy.

Already, the queen has stopped featuring on social media.

“Though the king has a daughter while he was a young man, there is the need to have an heir and more children in the palace. The people want an heir to the throne. Nobody prays for the Ooni to die young, he shall rule till he is 100 years but there is much joy when we see kids running around in the palace and when the people know that there is an Aremo (heir).

“He has been good to the people of Ile Ife and everyone prays that Queen Naomi becomes a mother soon and produce heirs to the throne. She is young, godly and very unassuming. The palace staff love her and hold the royal couple in high esteem. We pray they start a family soon,” a palace staff revealed to Kemi Ashefon.