Police confirm arrest of ritualist, other suspects linked to killings in Oyo

on July 09, 2020
The Police Command in Oyo State has confirmed the arrest of some suspects, including a ritualist linked to the frequent killings in Akinyele Local Government Area(LGA) of the state. 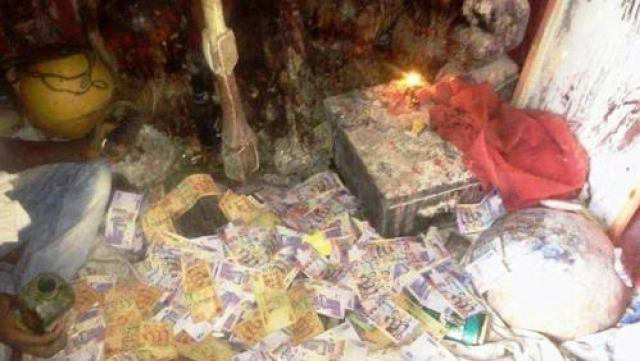 A Ritual shrine
No fewer than five persons were brutally killed in Akinyele LGA in June.
The deceased were a pregnant woman, Azeezat Shomuyiwa, 29, whose head was smashed with a stone on June 5; and a female student of Oke-Ogun Polytechnic, Grace Oshiagwu, 21, who was killed on June 13.
Other victims were 18-year-old Barakat Bello who was raped and killed, Mrs Olusayo Fagbemi, 42, who was macheted to death on June 24; and a 5-year-old boy, Mujeeb Tirimisiyu, macheted to death on June 22.
Spokesman of the command, Olugbenga Fadeyi who confirmed the arrests said on Wednesday in Ibadan, however, declined to give the number of suspects so far arrested in connection with the killings.
“Yes, we have arrested some suspects in connection with Akinyele killings; we will brief the press soon please,” he said.
Mr Fatal Owoseni, the Special Adviser on Security Affairs to Gov. Seyi Makinde, also confirmed the arrest of the suspects on Wednesday in a town hall session organised for stakeholders on tackling security in Akinyele area.
” As I speak now, the perpetrators of the killings in Akinyele have been apprehended.
“As at yesterday, the criminals had been apprehended. The person behind it has been taking the police to the ritualists and they are now behind bars,” Owoseni said.
Crime