Update: Couple who drilled a nail into the head of their 10-year-old maid remanded in prison (photos)

on July 07, 2020
The Enugu state Magistrate court on Monday, July 6, remanded a couple, Mr. Jude Ozougwu, and his wife, Ifeoma in prison for allegedly brutalizing their 10-year-old maid, Nneoma Nnadi. 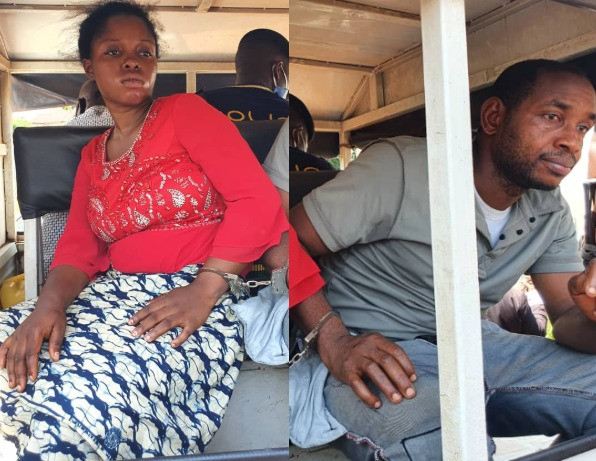 The couple made news over the weekend after photos of the battered body of Nneoma surfaced online.
The state police command today arraigned the couple before Chief Magistrate Agu of Enugu North Court 1 sitting in the Enugu North Magistrate District on three-count charge bothering on attempted murder. The charge marked No MEN/298c/2020 is between the Commissioner of Police vis Mr Jude Ozougwu ‘m’ age 40 years and Ifeoma Ozougwu ‘f’ age 24 years.

At the hearing of the case, the Police Prosecutor, CSP Paschal Nwachukwu, argued that the magistrate court lacked the jurisdiction to hear such a case. He added that the issue of bail for the couple as raised during court proceedings was premature, uncalled for, and against the dictates of the law.
“The evidence of this matter is grievous and weighty. How can one explain nailing a child as it was done to Jesus Christ, using hot pressing iron, sharp and dangerous objects on her even to her private parts,” he told the court
However, counsel to the couple, Emeka Orji, argued that the court should put aside the public sentiment attached to the case and grant the couple bail. Orji said the couple has two little children to also look after.
The presiding Magistrate, Agu, refused to admit the couple on bail and ordered that they be remand in the Nsukka correctional facility pending further advice by the state’s Director of Public Prosecution. The case was then adjourned till August 10 for a report of DPP’s advice.
Crime