on July 08, 2020
''We don't want the bridge to collapse''- Ministry of Works speaks on why 3rd mainland bridge is being shut for a period of six months. 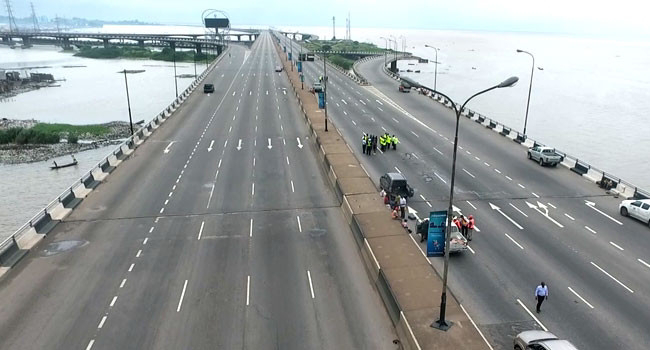 The Ministry of Works and Housing, says there is no going back in the proposed plan to shut the third mainland bridge for a period of six months beginning from July 24.
According to the Ministry, the repairs are necessary so as to avert a collapse of the bridge.
Speaking at a press conference in Lagos on Tuesday, July 8, the Controller of Works, Federal Ministry of Works, Mr. Olukayode Popoola, said the bridge was last rehabilitated in 2012 and that it is important repairs are carried out now to avert a collapse of the ever-busy bridge.
According to Popoola, the first three months would be used to carry out work on the part of the bridge coming from the Lagos Island to the Mainland, while work on the other portion of the bridge coming from Oworonsoki to Lagos Island would begin three months later.
“We don’t want the bridge to collapse. We want to replace worn out components and joints. The bridge will be partially closed and there will be diversion of traffic from midnight to 1pm every morning for movement from Oworonsoki to Lagos Island only on the Lagos Island bound lane while from 1pm to midnight, it will be Lagos Island to Oworonsoki traffic only on the Lagos Island bound lane.
This will be in place for three months for the repairs of the Oworonsoki bound lane,” he said
Popoola said the second phase of the work would follow the same pattern and would be for another three months.
“Motorists are advised to also ply the alternative routes of Carter Bridge through Iddo to Oyingbo to join Adekunle ramp inward Oworonsoki, or from Ijora through Western Avenue to Ikorodu Road,” he said
The repairs on the bridge is expected to terminate in January.
Local News